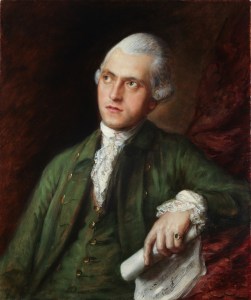 Anthony Kammell, as he called himself in England, (originally Antonín Kammel), was active as a composer in England between 1765 and 1784. He was one of the close circle of friends of Thomas Anson of Shugborough and a colleague of Johann Christian Bach. This study looks at his career and his world, and asks what became of his family.

There is an appendix with my case for Kammell as the subject of the newly discovered Gainsborough portrait.

A biography of Kammell, with details of his family and descendants. The first appendix explains the links between Kammell and Gainsborough. The second appendix looks at the possibility that Lola Montez was his great-granddaughter.

A listing of all known works.

An article for the journal Czech Music which looks at the philosophical ideas of music and nature from Kammell’s teacher Tartini that might have influenced Gainsborough, the Price family and Benjamin Stillingfleet.

Kammell Duet Op. 5 No. 1 arranged for orchestra by Andrew Baker

Kammell Duet Op. 5 No. 5 arranged for orchestra by Andrew Baker

Andante Alla Francese from Symphony in G with added wind.

Minuet from Kammell’s Sonata Op. 9 No. 1, at Shugborough.